View basket “Printing and the Book Trade in the West Indies” has been added to your basket.
Barber, Giles

Studies in the Booktrade of the European Enlightenment

The eighteen studies reprinted in this volume have appeared in leading British and European bibliographical journals during the last thirty years. This period of time is exactly that in which Anglo-Saxon techniques in analytical bibliography have been taken up in Europe and merged there with the more historically and sociologically based ones of the French “Annales” school to produce the new “Histoire du Livre” or “history of the book” approach to cultural history which is so much to the fore today. These essays by Giles Barber, who has been a constant intermediary in this evolution, are both something of a witness to this, and, at the same time, a factual contribution to the history of the European booktrade in the past three hundred years. They cover both of the basic sides of the trade: book production, meaning printing and binding, and bookselling, meaning both publishing and bookselling, trades which were only then beginning to separate the one from the other. In a trade vital in the history of ideas, the period covered, from 1720 to 1830, sees the end of the domination of the Dutch, the defeat of the colonial aspirations of the French, and the world-wide spread of the English language. A general rise in the reading habit led to new marketing, to new conceptions of authors’ rights, and to technical innovations, all of which were to force a radical reorganization of the trade in the next century. 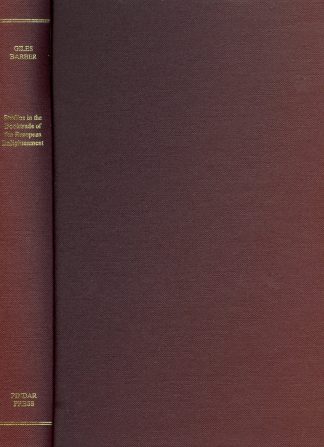 You're viewing: Studies in the Booktrade of the European Enlightenment £50.00
Add to basket
We use cookies to ensure that we give you the best experience on our website. If you continue to use this site we will assume that you are happy with it.Accept