Studies in English Printing and Libraries

This volume brings together John Oates’ studies on English printing, and the collection at Cambridge University Library, to which he devoted his career. It contains fifteen studies on English printing between the filteenth and the eighteenth centuries, and eleven studies on the collection of Cambridge University Library. Three further studies reflect his interest in Sterne, which began as a hobby, and on whom he formed a collection of international repute.

The publication of these papers in collected form provides a fitting memorial to a lifetime’s work on English printing, and a career as one of the great scholar-librarians of modem times in England. There is a preface by Dennis Rhodes, who has also contributed a bibliography of John Oates’ publications. 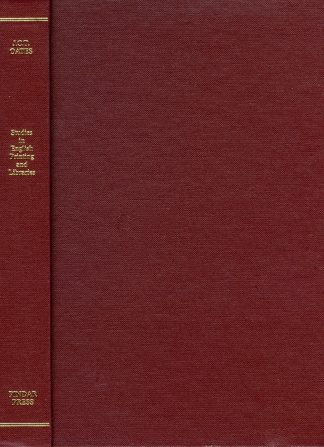 You're viewing: Studies in English Printing and Libraries £50.00
Add to basket
We use cookies to ensure that we give you the best experience on our website. If you continue to use this site we will assume that you are happy with it.Accept