View basket “Bernini at Saint Peter’s – The Pilgrimage” has been added to your basket.
Lavin, Irving

Bernini at Saint Peter’s – The Pilgrimage

Bernini at Saint Peter’s may be a unique case in history: a single artist in change of a grandiose monument in a continuous state of creativity under constantly changing patrons and a variety of projects, for nearly six decades. This book argues that a continuous thread of thought may be discerned underlying and connecting the vicissitudes of this spectacular display. From first to last, Gianlorenzo Bernini conceived of Saint Peter’s as a pilgrimage church, a kind of pilgrimage of human life, his own and of the believers who visited the basilica to worship and give testimony.

Irving Lavin is professor emeritus in the School of Historical Studies at the Institute for Advanced Study in Princeton. He is one of the most distinguished and honoured art historians in the United States. Professor Lavin is best known for his series of fundamental publications on the Baroque artist Gianlorenzo Bernini (1598-1680). These include new discoveries and studies on the master’s prodigious early life, his architecture and portraiture, his invention of caricature, his depictions of religious faith and political leadership, his work in the theatre, his attitude towards death and the role of the artist in the creation of a modem sense of social responsibility. 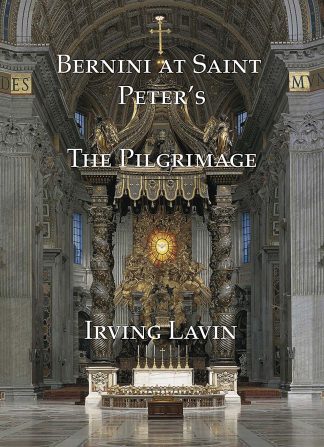 You're viewing: Bernini at Saint Peter’s – The Pilgrimage £150.00
Add to basket
We use cookies to ensure that we give you the best experience on our website. If you continue to use this site we will assume that you are happy with it.Accept