View basket “Art Between Culture and Nature” has been added to your basket.
Lavin, Irving

As early as the 1950s, Professor Irving Lavin was -recognized as a major voice in American art history. His sustained production of seminal scholarly contributions have left their mark on an astonishingly wide range of -subjects and fields. Bringing these far-reaching publications together will not only provide a valuable resource to scholars and -students, but will also underscore fundamental themes in the history of art — historicism, the art of commemoration, the relationship between style and meaning, the -intelligence of artists — themes that define the role of the visual arts in human communication.

Irving Lavin is best known for his array of fundamental publications on the Baroque artist Gian Lorenzo Bernini (1598–1680). These include new discoveries and studies on the master’s prodigious childhood, his architecture and -portraiture, his invention of caricature, his depictions of religious faith and political leadership, his work in the -theatre, his attitude toward death and the role of the artist in the creation of a modern sense of social responsibility. All of Professor Lavin’s papers on Bernini are here brought together in three volumes. The studies have been reset and in many cases up-dated, and there is a comprehensive index.

Be the first to review “Visible Spirit. The Art of Gianlorenzo Bernini – Vol II” Cancel reply 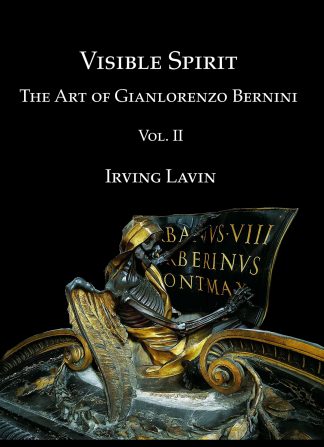 You're viewing: Visible Spirit. The Art of Gianlorenzo Bernini – Vol II £150.00
Add to basket
We use cookies to ensure that we give you the best experience on our website. If you continue to use this site we will assume that you are happy with it.Accept