The title is an allusion to the description by Suger, Abbot of St. Denis, of the men of the Auvergne. Suger depicts “that old pride” in a chapter of his Deeds of Louis the Fat, which chronicles the arrival of King Louis VI in the region (1122 and 1126), to succor Eimeric I, the Bishop of Clermont, obliged to flee his episcopal town after its seizure by the Count of Auvergne. The citation provides a frame of reference for the subject of this study: the Auvergnat laity and its relations with the Church as they can be deduced from the abundant representations of secular figures in Romanesque Auvergne.

A wide-ranging interdisciplinary approach is brought into play in dealing with the art historical, historical, social, political, legal, theological, and liturgical aspects of the theme. The first three chapters treat the various contexts in which secular characters appear. Chapter 1 distinguishes between two series, of lay donors and of avaricious persons, Chapter 2 discusses figures of warriors in enigmatic contexts in the churches of Brioude and Riom-ès-Montagnes. Chapter 3 is concerned with non-noble figures, namely a group of rustic shepherds. Chapter 4 examines the ecclesiastical condition in the province through a case study of the monastic community of Mozac.

The description of the peculiarities of Auvergnat Romanesque sculpture, and the inquiry into the imagery as a product of the rival forces of Church and laity, offers a new reading of such matters as property, social hierarchy, law, liturgy, and theology, as they are reflected in stone. The unrecorded past of the figures in various contexts of giving or of indulging in avarice, war, and bloodshed, is perhaps compensated by this sculptural abundance. 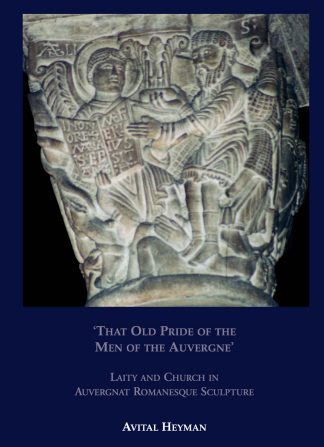 You're viewing: “That Old Pride of the Men of the Auvergne” — Laity and Church in Auvergnat Romanesque Sculpture £50.00
Add to basket
We use cookies to ensure that we give you the best experience on our website. If you continue to use this site we will assume that you are happy with it.Accept