View basket “Studies in Italian Art” has been added to your basket.
Trapp, Joseph

Studies of Petrarch and His Influence

Professor Joseph Trapp has been Director of the Warburg Institute, and is an authority on Renaissance humanism and the classical tradition. The present volume brings “together twenty-one of Professor Trapp’s more recent papers on the illuminated manuscripts of Petrarch, and his lasting “influence.

The fifteenth- and sixteenth-century movement which led to a European revaluation of social, political, ethical, literary, artistic and intellectual experience and which we know as the Renaissance was given its decisive early impetus from Italy in the fourteenth by Francesco Petrarca (1304-1374). Petrarch is present, sometimes visibly, sometimes all but invisibly, within all the manifestations of the Renaissance imagination covered by these essays. His presence is most obvious in the first division of this book, Petrarch Illustrated, where a comprehensive survey and a number of specialized studies bring up to date and in other ways augment the great work of the prince d’Essling and Eugène Müntz, published in 1902 and now in need of revision in many respects. In the second section, Petrarch is present by reputation and implication, and through the homage paid to him, directly in pilgrimage to and adornment of places where he lived and the search for personal mementos, or indirectly in the search by generations succeeding him for the authentic image of the classical authors whom he studied, imitated, revered and loved as friends, or in the permeation into Northern Europe of the study of the classics which he saw as the guide to letters and to life and its modification by humanists and Biblical scholars. Erasmus, Thomas More and William Tyndale, widely different in both their Christian faith and their views of the Biblical text in Latin, Greek or English, without consciously being aware of it, owed their preoccupation with the texts ultimately to the example of Petrarch and his Italian successors, particularly the schoolmaster Guarino of Verona and the great philologists Lorenzo Valla and Angelo Poliziano. 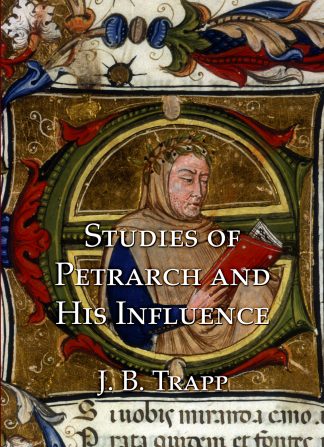 You're viewing: Studies of Petrarch and His Influence £120.00
Add to basket
We use cookies to ensure that we give you the best experience on our website. If you continue to use this site we will assume that you are happy with it.Accept