Studies in the Layout, Buildings and Art in Stone of Early Irish Monasteries

Professor Herity is one of the leading archaeologists in the Early Christian period in Ireland. These papers document a sustained interest in the early development of Irish Christian monasteries and hermitages between the years 400 and 700. Major concerns include the form and layout, buildings and other monuments of these early foundations, particularly those on islands in the Atlantic, most of which were founded before 600. Examination of their cross-carved slabs and pillars has led to a study of the forms of the Tomb of the Founder Saint and the characteristic pilgrimage round known in Irish as an Turas and still performed today. The development of ideas based on the pioneer work of Françoise Henry is documented in two papers on Fechin’s hermitage at Ardoiléan or High Island off the Galway coast in 1977 and 1990. Recent papers are also concerned with the forms of the Chi-rho and other early crosses in the insular context.

Be the first to review “Studies in the Layout, Buildings and Art in Stone of Early Irish Monasteries” Cancel reply 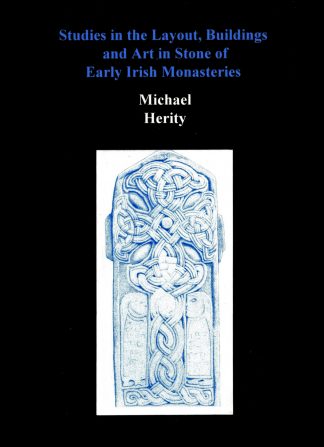 You're viewing: Studies in the Layout, Buildings and Art in Stone of Early Irish Monasteries £60.00
Add to basket
We use cookies to ensure that we give you the best experience on our website. If you continue to use this site we will assume that you are happy with it.Accept