In this second volume of Professor White’s studies, the emphasis shifts to Italian art in the thirteenth and fourteenth centuries, and the major figures who were responsible for the decisive changes in painting and sculpture that were to lead on to the Renaissance. Here again, however, there is the same concern with the actual monuments. The author devotes two major studies to the reconstruction of the “original appearance of Duccio’s Maestà and of Nicola Pisano’s Perugia Fountain. An important new study of the physical evidence for Cimabue’s work at Assisi shows the value of an understanding of the working processes involved there. This conviction that the starting point in a thorough investigation into the original appearance or development of any work of art lies in the observation of the physical evidence is central to Professor White’s approach, whether this may be the arrangement of panels on a polyptych, or the scrutiny of giornate on a painted ceiling. 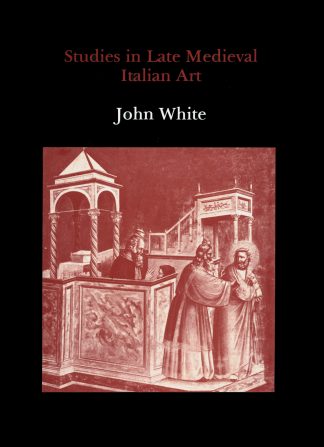 You're viewing: Studies in Late Medieval Italian Art £75.00
Add to basket
We use cookies to ensure that we give you the best experience on our website. If you continue to use this site we will assume that you are happy with it.Accept