View basket “Studies in European Printing and Book-collecting” has been added to your basket.
Rhodes, Dennis E.

Studies in European Printing and Book-collecting

This second volume of Dr. Rhodes’ Studies covers the wider field of early printing in Western Europe outside of Italy. The spread of printing in England receives considerable attention, especially in the case of the London and Oxford presses. There are separate sections on printing in France, Germany, Spain and the Low Countries over this period.

Of particular importance is the final series of articles on early collectors of printed books in Western Europe, which deals equally with the collectors and their libraries, including, in this case, the Italian collections. 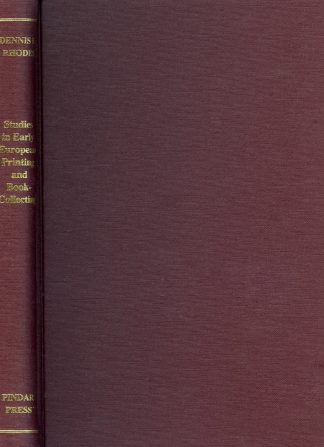 You're viewing: Studies in European Printing and Book-collecting £50.00
Add to basket
We use cookies to ensure that we give you the best experience on our website. If you continue to use this site we will assume that you are happy with it.Accept