Essays in Honour of Otto Demus

Edited by Thomas E. A. Dale, with assistance from John Mitchell

Romanesque mural painting was arguably the most visible field for religious images in Western churches between the eleventh and thirteenth centuries. Beyond its traditional justification as Bible of the illiterate mural painting demarcated the principal functional spaces within the church and propagated the sacred narratives, the systems of belief and institutional politics.

The present volume provides the first accessible collection of essays devoted exclusively to the contextual interpretation of Romanesque mural painting. They are offered in homage to Otto Demus, who established the essential parameters for the field with his unsurpassed survey of the field over thirty years ago. Presenting previously unpublished research on individual case studies from Italy, France and Spain, the collection of essays published here pursues Demus’s premise that mural painting was designed both to shape the experience and ritual use of distinctive spaces within the medieval church, and to advertise certain institutional affiliations and political agendas. The introduction, by Thomas Dale, provides a methodological overview to the field, assessing Demus’s contribution to the study of Romanesque mural painting and surveying the scholarship of the past thirty years. It also furnishes the first overview of primary texts that refer to the functions and exegesis of mural painting between the tenth and thirteenth centuries.

The ten essays are grouped under four topics
1. Patterns of Narrative Disposition in Sacred Space
2. Reinforcing the Praesentia of the Saints: The Church as Locus Sanctus
3. The Burial Crypt as Mediator between the Living and the Dead, Terrestrial and Celestial Space
4. Ecclesiastical Politics and Institutional Identity. 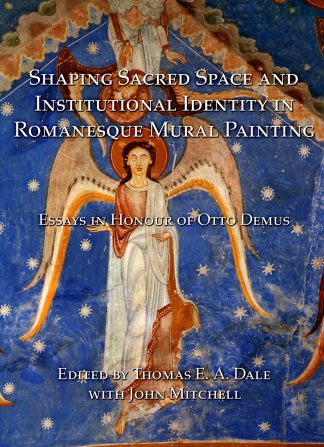 You're viewing: Shaping Sacred Space and Institutional Identity in Romanesque Mural Painting £75.00
Add to basket
We use cookies to ensure that we give you the best experience on our website. If you continue to use this site we will assume that you are happy with it.Accept