View basket “Artists’ Art in the Renaissance” has been added to your basket.
Cuttler, Charles D.

Professor Charles D. Cuttler changed from artist to art historian at New York University’s Institute of Fine Arts, studying under distinguished teachers such as Walter Friedlaender and Erwin Panofsky. A specialist in Flemish painting, he spent the major part of his career teaching at the University of Iowa. He published numerous articles, reviews, and a well known text, Northern Painting. He lectured on Bosch on three continents, and his retirement enabled him to devote time to further research. A result is Hieronymus Bosch: Late Work.

This new book presents Cuttler’s discoveries on three late triptychs, a major trio of Bosch’s maturity: the Haywain, the Lisbon Temptation of St. Anthony, and the Garden of Earthly Delights. He presents Bosch’s unique view of Christ and salvation in union with hagiography, the Devotio moderna, and medieval hermeneutics, a revelation of Bosch’s immense erudition and overwhelming artistry. Bosch reinforced his concepts with supporting casts of animals, natural and demonic, birds, and other iconographic elements. Analysis of the Berlin painting of St. John the Evangelist’s apocalyptic vision of the Virgin Mary, the Madrid Seven Deadly Sins tondo, and the Vienna drawing of the Tree-Man expands our understanding of these themes. Other influences affecting Bosch’s art, such as whether he travelled or whether he used contemporary prints, whether he drew upon Dante’s Inferno, or religious tracts, and the attitudes of his ambience are also examined. The final chapter presents the author’s understanding of Bosch, his religiosity and his genius, in his time and place. 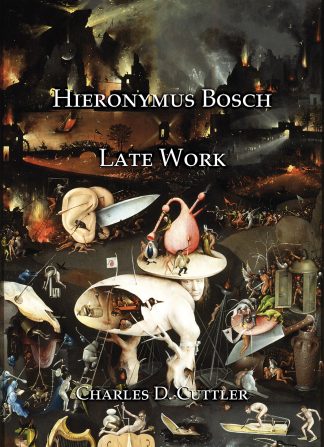 You're viewing: Hieronymus Bosch: Late Work £120.00
Add to basket
We use cookies to ensure that we give you the best experience on our website. If you continue to use this site we will assume that you are happy with it.Accept