View basket “Eastern Turkey: An Architectural & Archaeological Survey Volume II” has been added to your basket.
Sinclair, T. A.

This second volume continues with a description of the fine Georgian monuments of the Tao region, including Ihan, Ök Vank, and Haho. The Pontus region comes next, the centre of the medieval Greek empire of Trebizond. The many Byzantine churches of Trabzon itself are covered, including Aya Sofya and the nearby monasteries of Sumela and Vazelon. The many surviving churches and castles of this period and later in the Pontus are also dealt with. There follows a survey of the early Turkish architecture of Erzurum and the surrounding district. The subsequent section, on Sivas and Tokat, deals with a rich selection of Seljuk monuments; the site of ancient Comana is also covered. The region of the Anti-Taurus contains interesting Byzantine castles. There are also Early Christian remains and medieval castles The volume concludes with a study of the early Turkish monuments of the Upper Euphrates, in Divrigi and Erzincan, and the border castles of the 9th and 10th centuries. 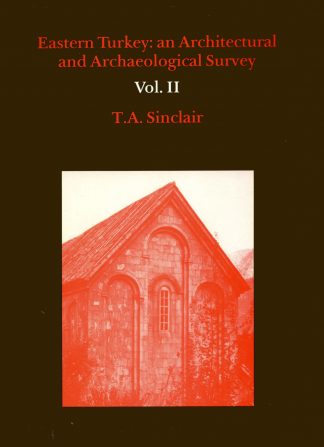 You're viewing: Eastern Turkey: An Architectural & Archaeological Survey Volume II £225.00
Add to basket
We use cookies to ensure that we give you the best experience on our website. If you continue to use this site we will assume that you are happy with it.Accept