View basket “Studies in Early Russian Art” has been added to your basket.
Sinclair, T. A.

Civilizations of great diversity have succeeded each other or co-existed in Eastern Turkey, and most of them have left monuments of high quality. Hittite, Urartian, Hellenistic, Roman, Syrian, Byzantine, Armenian, Arab, Seljuk and Ottoman, their remains are all represented in the region. These include some of the most important sites in Near Eastern archaeology, in regions in and near the heartland of the Hittite and Urartian cultures. The Hellenistic cities reflect the introduction of a new civilization, and the Roman and Byzantine empires included all or part of the region, with the prosperous feudal states of Georgia and Armenia on their borders. Besides the Byzantine, three great East Christian monastic traditions, Syrian, Georgian and Armenian, flourished here from the late fourth century onwards, and their monuments have left a permanent mark on the landscape. The Seljuk invasion, followed by the more recent period of Ottoman rule, led to the imposition of a new culture on the region, and its reflection in the monuments. Some of the finest Seljuk buildings are in Eastern Turkey, and the buildings of the Turkish states east of the Seljuk empire form much of the early history of Turkish architecture. The independent Greek empire of Trebizond and two of the four Crusader states lay in Eastern Turkey. The lands of the empires and the smaller medieval states were heavily fortified, and their castles and other fortifications are now spread over the region.

The cultural diversity of its inheritance has made Eastern Turkey one of the most fascinating regions for archaeological and art-historical research. These four volumes provide the first comprehensive guide to all of the important historical sites of the region, the result of eight years of travel and research. The monuments are dealt with by geographical location, including a full description of each site, and details on how it can be reached. In the case of the more important monuments, a full bibliography of earlier work is provided. The ample provision of photographs and plans enhances the value of the author’s detailed descriptions.

The first volume begins with an introduction to the region, its landscape and population. The monuments are classified and set in their historical context. Their location and “present-day use (a matter of some importance for their “continued survival) are also dealt with. The first region covered is the area around Lake Van, the centre of Urartian civilization, and of the later Armenian kingdom of “Vaspurakan. The Urartian, Armenian and Islamic monuments are dealt with in detail, including Toprakkale, Van itself, the island monastery of Aghtamar, Yedi Kilise, the lslamic monuments of Ahlat, and the Nestorian monasteries of the Hakkari region. The following section, on Kars and Ararat, the centre of an important medieval kingdom, deals mainly with the still-existing monuments of this period, centered on the ancient capital of Ani. Each regional section is prefaced by a general survey of the history and architecture of the district covered and is followed by a more comprehensive historical guide. A detailed fold-out map of each region, specially designed for this volume, gives the location of each monument discussed.

Be the first to review “Eastern Turkey: An Architectural & Archaeological Survey Volume I” Cancel reply 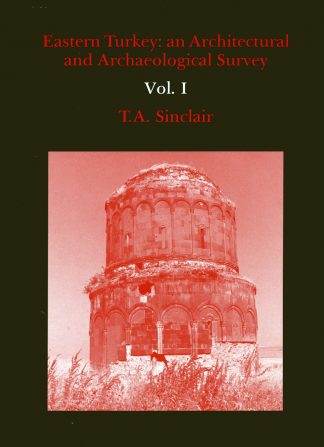 You're viewing: Eastern Turkey: An Architectural & Archaeological Survey Volume I £225.00
Add to basket
We use cookies to ensure that we give you the best experience on our website. If you continue to use this site we will assume that you are happy with it.Accept